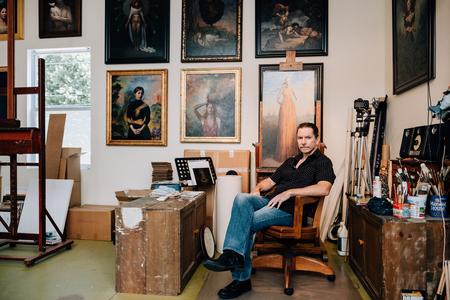 No images may be used for commercial purposes without permission.

Steven Kenny was born in Peekskill, New York in 1962. He attended the Rhode Island School of Design, receiving a Bachelor of Fine Arts degree in 1984. His final year of art school was spent studying independently in Rome. This direct exposure to European art (especially the Baroque works of the Italian and Dutch schools) had a significant effect on his painting style.

In 1997 Steven turned away from illustration in order to devote his full attention to fine art. Since that time he has lived in the Blue Ridge Mountains of Virginia, his home state of New York, St Petersburg, Florida, and now lives and works in Floyd County, VA. His award-winning paintings are exhibited in galleries across the United States and Europe. Honors include grants from the Virginia and Franz Bader Fund and the Joyce Dutka Arts Foundation; fellowships from the Virginia Commission for the Arts, Virginia Center for the Creative Arts, and Creative Pinellas; as well as the St Petersburg Arts Alliance Visual Art MUSE Award. His paintings can be found in the permanent collections of the Polk Museum of Art, Leepa-Rattner Museum of Art, Museo Arte Contemporanea Sicilia, State College of Florida and many private collections around the world.

From an early age the beauty and mystery of nature have deeply influenced his chosen subject matter: surreal compositions that most often combine the human figure with elements from nature to comment on our interactions with the environment while symbolically alluding to the multi-facetted dynamics of human nature in general. Stylistically, Steven employs Old Master oil painting techniques to create images that are visually reminiscent of the Renaissance and Northern Baroque periods while being firmly rooted in the realm of Contemporary Art.